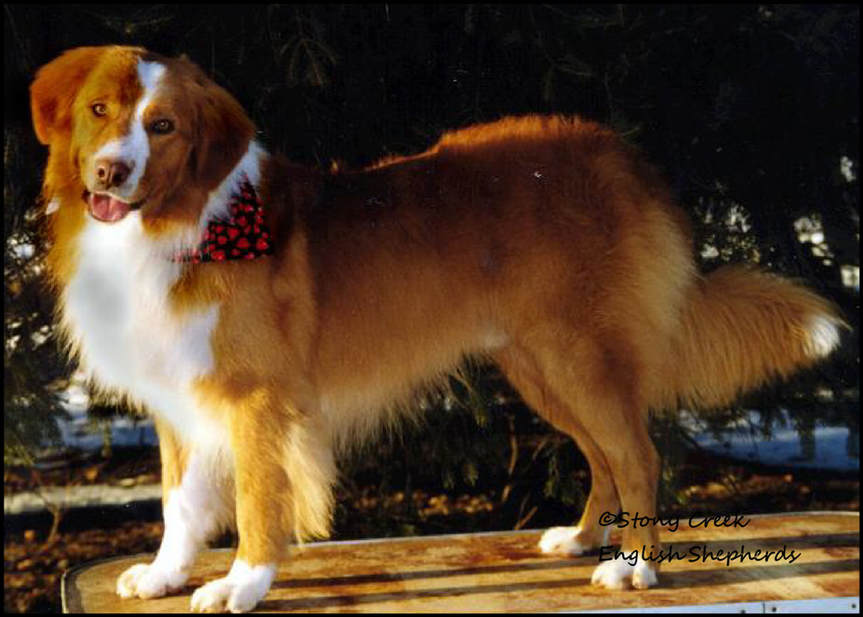 HERDING
English Shepherds are natural low heelers, with strong herding instinct. They exhibit agility, stamina, and stout hearted perseverance and will use the amount of force necessary to accomplish the job. Their natural instincts enable them to work with a minimum of direction, however they can be trusted to not bother livestock when help is not needed.

HUNTING
English Shepherds are also valued for their tracking, hunting and treeing ability. Advertising brochures from the 1950s depict English Shepherds treeing squirrel, coon and possum, and note "English Shepherds will tree anything and everything." This may include, of course, your neighbor's cat! An industrious English Shepherd may not be satisfied with simply treeing critters -- he may decide to climb a tree or two himself! English Shepherd owners need to be aware of and make allowances for the many faceted drives their dogs inherit.

Appearance
The English Shepherd is a dog of medium size, presenting a picture of sturdy balance and harmonious proportions, built for speed and maneuverability. He is alert and his face shows a high degree of intelligence. English Shepherds have a medium length, double coat, which affords all weather protection.

English Shepherds come in four basic color patterns: black and tan, sable and white, tricolor (black, white and tan), and black and white. Because they have not been bred for the show ring, English Shepherds have retained much natural variation in features such as ear set, tail carriage, markings, and even build. These differences are appreciated by their owners as reflective of the care breeders have taken to preserve the essential character of the breed, rather than focusing on attaining perfect conformity to a "cookie cutter" ideal.

English Shepherds are descendants of the Shepherds' dogs of Scotland and N. England. This group also gave rise to modern "show" Collies and Border Collies. English Shepherds differ from their cousins in having been bred primarily for an upright, loose-eyed herding style, and by the continuous selection for all-around ability. These abilities include not only herding but also guarding and hunting. The surge in popularity of dog shows and sheepdog trials in the 20th century resulted in increased demand for the Collie types which these venues were designed to showcase. English Shepherds have never been primarily show dogs or trial dogs, but rather practical versatile workers for farmers who were interested in function rather than flash.

Copyright to The English Shepherd Club 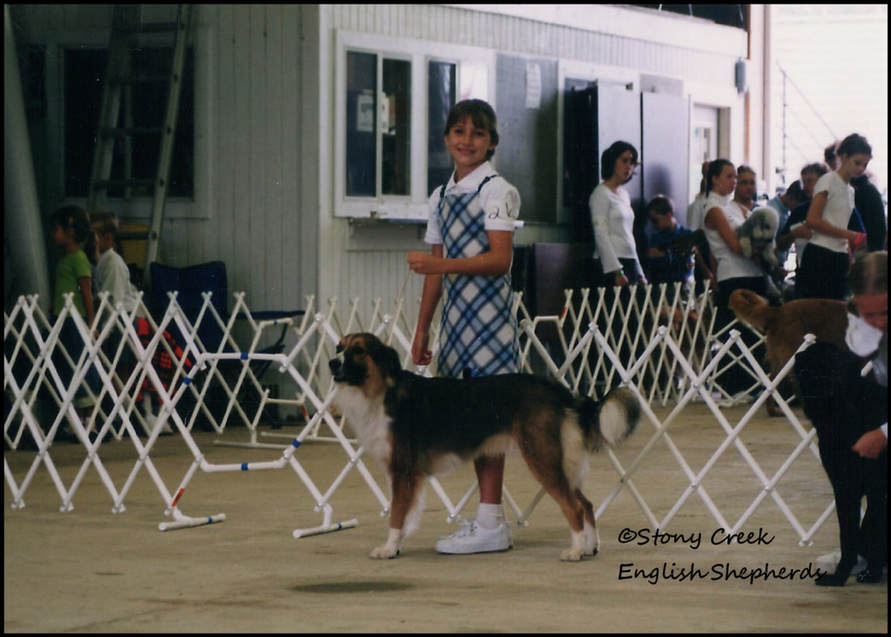 HISTORY
According to legend, the English Shepherd is a combination of native dogs of the British Isles and the Roman sheep and cattle dog brought to the British Isles by Caesar when he invaded in 55 B.C. Romans used these dogs to herd the livestock brought along to feed the troops. As the livestock was depleted, surplus dogs were left along the way, and were used by local natives and interbred with existing types of dogs with similar herding talents to intensify those instincts. The English Shepherd was brought to the American colonies by some of the first settlers and followed the development of the United States from east to west. This multi-purpose breed was highly prized as it was used to herd valuable livestock and to protect the isolated homesteads. The United Kennel Club is the original registrar of the English Shepherd and has recognized them since 1934.

GENERAL APPEARANCE
A medium-sized dog of sturdy balance and harmonious proportions. Built for speed and maneuverability. The English Shepherd's alert face shows intelligence. Being a "total" breed, English Shepherds should be judged both on their ability to work livestock and their physical and structural appearance. To be taken into primary consideration are type, balance, soundness, gait and temperament.

CHARACTERISTICS
Energetic, intelligent, very active, agile, courageous and gritty. Fearless for their purpose. Acting immediately when commanded, and very responsive to the master's voice. Adapting themselves almost at once to working commands around farm stock. Working characteristics include: strictly low heeling, and very free with the use of their teeth. Also very watchful as guards of the home. Companionable to their master.
Fault: Excessive nervousness, or aggression.

HEAD
The head is of medium length and slightly rounded between the ears. The head and neck are carried slightly raised. The skull is wide and flat above the eyes, broad between the ears. The width of the skull, between the inner corners of the bases of the ears, is approximately the same distance. The flews are straight and do not droop. The jaws are deep and powerful.
Faults: Peaked or domed skull.
STOP - Medium stop, moderately defined.
MUZZLE - The muzzle is moderately broad, but is neither wide and stubby nor thin and snipey. The length of the muzzle, from the tip of the nose to the stop, is about equal to the distance from the stop to the occiput.
Faults: Heavy, pugged. Snipey.
TEETH - Strong and regular, scissors bite.
Severe faults: Overshot and undershot bites.
EARS - Wide at the base. Folding over approximately ¾ down and laying close to head.
EYES - Dark or medium brown. Moderately round with a slightly oblique set. Express character with a strong, intelligent look.
Faults: Protruding or sunken eyes.

BODY
The backline is horizontal. The shoulders are well laid back; shoulder blade and upper arm are about equal length. The ribs are well sprung. The body length, from the point of the shoulder to the point of the buttock, is about the same as the height at the withers. The loins are strong and deep. The flank is not tucked up.
Faults: Roached or sway back.

TAIL
Moderately long with the tip of the bone reaching to the hock joint. A Plume tail. Carried slightly higher than back, only slight curve, when standing or at rest the tail should not be carried straight up or over the back.

Natural bobtails are acceptable, should be about six to eight inches long and carried level with the back line.
Fault: A tail that is carried straight up and over the back when the dog is at rest.

COAT
Coat is thick, glossy, and soft. May be straight, wavy or curly, except on the face, skull and legs. Fully covering body from ears down to feet. Reaching well under the body and on the upper half of the legs. The front legs are feathered. The tail is plumelike. The undercoat is soft and fine, affording protection from the elements, Any evidence of excessive grooming is to be penalized.
Faults: Kinky coats. Heavy manes and heavy frills on the underside of the neck and on the chest.

COLOR
There are five predominant color patterns: Black and White; Black and Tan; Black, White and Tan; Sable and White, and Tan & White . The Black and White has a well-defined black coat with white trim. White trim may include: a white neck ring, a blaze of white on foreface and/or topskull, or both, as well as those areas defined below for tan trim. However, the white blaze should not extend back so far as to meet the white neck ring.
The Black and Tan has a well defined black coat with tan trim, which appears on the cheeks as "shepherd spots," over the eyes, as a broad chest bar, on the front legs as stockings up to just above the knees, inside the hind legs, on the feet, or under the tail and inside the ears. A Black and Tan may white on the chest. If any white appears in the trim areas, the dog is not a Black and Tan, but is defined as a Black, Tan and White (tri-color).
The Black, Tan and White (tri-color) has a well defined black coat with some white replacing the tan trim. There must be, however, tan "shepherd spots" over the eyes.
Tan includes colors from light gold to mahogany brown.
The Sable and White has a well-defined, sable-colored coat with white trim.
Tan & White has a well defined tan coat, which can range from shades from a Fawn to a Red, with white trim.
Permitted: white neck ring, white tip on tail, white chest; white on lower legs; blaze on face
Disqualifications: Excessive white covering more than 1/3 of dog. Solid white coats. Whites with black or sable spots. Blue merles. Solid red or red merle. Solid black coat. Albinism. 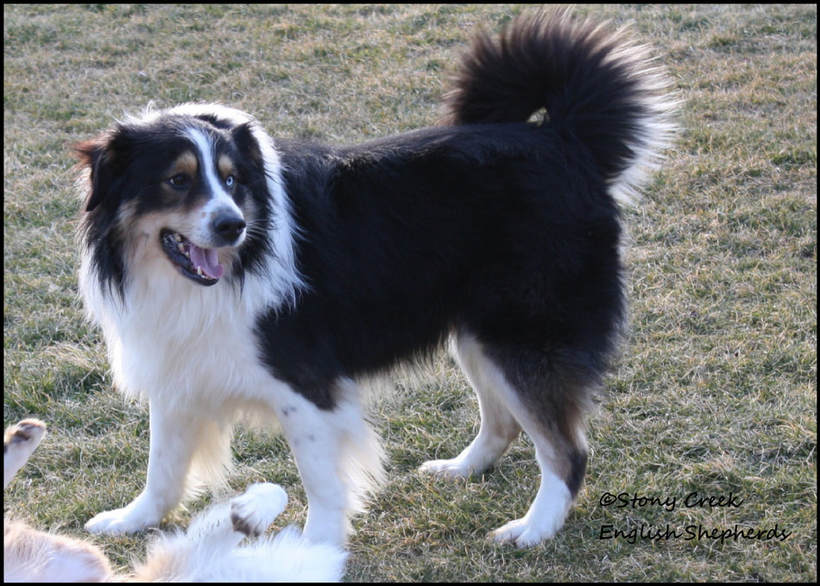